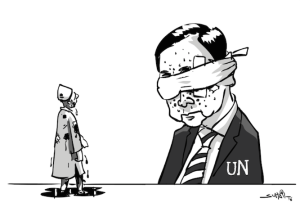 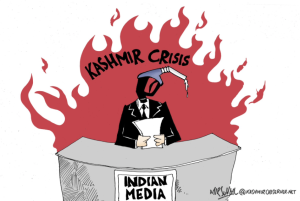 It’s one of life’s rude awakenings to face realities about the role the United Nations plays in world politics. It functions more as an agency giving official sanction to war & occupation than one of settling differences in non-military ways. It formulates lots of resolutions about human rights but can do little to enforce them & does not condemn nations in unequivocal terns for flagrant war & human rights crimes. That’s because the countries that run the operation are the ones causing all the trouble in the world.

But the UN also has a military force, second only to the US in the number of soldiers deployed around the world. They call their army “peacekeepers” just like the US Pentagon calls civilian deaths “collateral damage.” It took UN officials over six years to acknowledge that UN troops deployed to Haiti after the 2010 earthquake were responsible for the outbreak of cholera that made over 786,000 people sick, hospitalized over 434,000, & killed 9,700.

These are cartoons about the current UN silence in addressing the extreme violence of the 76 day military siege in Kashmir.