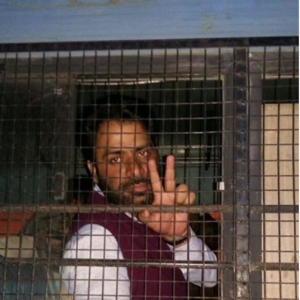 This is a rather poignant photo from yesterday of Khurram Parvez being taken by police to jail in Jammu, 300 kilometers from his family in Srinagar & from his legal counsel in the Jammu Kashmir Coalition of Civil Society JKCCS).

If one looks at the work he has done in the reports of the JKCCS– where they dealt with & publicly exposed gruesome human rights crimes, including unearthing mass graves of the disappeared–you know he must be a pretty tough-minded guy. But tough-minded doesn’t mean stone-hearted. He has a family, including at least one small boy. He once said on FB that he doesn’t want his & other kids to grow up under occupation.

He’s being imprisoned under the Public Safety Act which means he could be away from his family for a long while. His safety in detention is a concern not just because of his fearless human rights work but because India has demonstrated a complete & monstrous disregard for law during this nearly 11-week siege.

Petitions don’t set the world on fire; they don’t perform magic & they don’t scare the bejeezus out of state power. They are primarily an education tool & part of a broader international campaign to defend Khurram Parvez. No one should have to be asked to twice to sign this petition & to circulate it in his defense. It is the least one can do for a man who has committed his life to human rights.