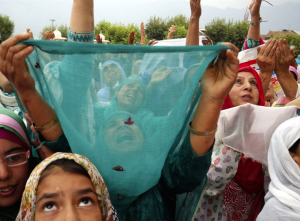 This is day 76 of the military siege in Kashmir. At least 105 have been killed; hundreds are admitted to hospital every day with pellet gun & other serious injuries, some of them disabling & blinding & all of them disfiguring. Somewhere around 11,000 have been injured & there are reports of a blockade on aid & medicine. Nationalist war-mongering against Pakistan has reached a fever pitch after the incident at the Uri military base.

But this is what Yahoo thought suitable to publish today about Kashmir: Kashmiri women praying before a relic at a shrine in Srinagar, identified as “the summer capital of Indian Kashmir.”

It’s like the sunset photos of Gaza while Israeli tanks amass at the apartheid barrier or Afghan children hopscotching while US war planes fly sorties without notice.