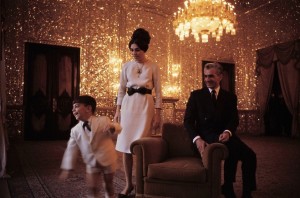 This is the Shah of Iran. He thought he was a blue-blood royal like some people believe in fairies & unicorns. He’s in that loathsome panoply that includes Pinochet, Omar Suleiman (the torturer), Henry Kissinger, Generals Sisi & Mubarak, Ferdinand Marcos, Netanyahu, Felipe Calderón, & several others. This is how you live & dress if you play ball with the US & its torture agency, the CIA.

His power rested on SAVAK, the secret police trained in torture by the CIA, using methods so extreme & barbaric they couldn’t be described in detail lest readers be overwhelmed with not grief but terror before power.

Under the man who called himself Shah, thousands were tortured using electric shock, whipping, beating, inserting broken glass & pouring boiling water into the rectum, tying weights to the testicles, beating the soles of the feet, extraction of teeth & nails using pliers, & torturing children in front of their parents. There were special torture techniques for women. Thousands were also murdered. That is why the CIA exists; that is what they are doing to thousands of prisoners in their secret prisons now.

We can’t bring this detestable criminal back from stinking up hell. (The title of Shah doesn’t hold much cachet down there.) But we can commit ourselves to demanding the abolition of CIA prisons, the dismantling of the CIA, the prosecution of all its officials & agents, & we can chase their asses off campus when they come recruiting. Rebuilding the international antiwar movement is part of the process of doing that.