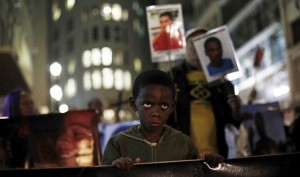 There’s just a mountain of lies (of the omission kind) in the Guardian-UK caption to this photo: “São Paulo, Brazil: A boy takes part in a protest against police violence.”

It’s a charming photo of this little fellow & if it was part of an album of photos from the tens of thousands protesting in São Paulo, it would be a real crowd pleaser. But it’s not just one of the only photos; it is the only report allowed to break the media blackout on protests in Brazil for the past several months that (by police estimates) number in the millions.

Massive protests have gone on all over Brazil since 2013 opposing exorbitant government expenditures on stadia & infrastructure for the 2014 World Cups & 2016 Olympics. Protesters marched against austerity & growing impoverishment, land dispossessions of Indigenous tribes, military occupation of the favelas, police & military violence against Indigenous people & against the protesters. And for the past several months, millions have marched against corruption scandals in the Workers’ Party of President Dilma Rousseff & demanding her impeachment.

All those millions of protesters for months on end & all media can produce is this charming little picture of a child? A panoramic view of the March protest would have been quite a shot. Estimates by police went up to 3 million people. You don’t see that very often. The estimates of the April march went up to 1.5 million people. And these events weren’t front page news? Is it because such news would unsettle the plans for the 2016 Olympics & deter attendance?

The political PR about Dilma Rousseff being a radical visionary is running out of steam. Her brief youthful flirtation with socialism isn’t holding water when she’s nothing but a two-bit neoliberal operator. Politicians play populist all the time. We’re watching that spectacle unfold with Hillary Clinton in the US. But PR isn’t keeping up with plunder on the ground.

As for this photo: protesters don’t usually bring children to small protests likely to be assaulted. So we might speculate that around this boy there are tens of thousands of protesters demanding the end of neoliberal austerity, the end of police violence, & the removal of Dilma Rousseff.