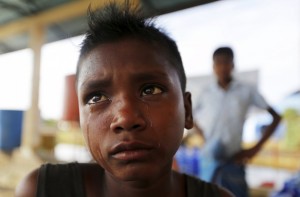 What a spin they’re putting on the immigration crisis in the Andaman Sea. It’s like a psycho-tragic version of the Blame Game. The first line of attack is against “human traffickers” who abandoned the immigrant ships at sea. Of course they wouldn’t be in business in the first place if Rohingya weren’t fleeing persecution & they wouldn’t have abandoned ship if they had been allowed to berth & discharge desperate refugees seeking sanctuary.

Another line of attack is the refugees themselves. The Guardian-UK says: “Rohingya refugees have spoken of horrors at sea: of murders, of killing each other over scarce supplies of food & water, & of corpses thrown overboard.” Take a moment to recover from the ugliness & cynicism of that report. Are they suggesting Rohingya are criminals & sociopaths? Are they incapable of imagining the trauma involved in starving to death & watching others die?

When people died from illness or starvation on board, what should they have done with the bodies? What would the lard-brained Guardian editors have done? In fact, the Guardian also reported the refugees tried to save supplies for women & children on board. Because even under extreme mental & physical duress, the refugees were unable to act with the barbarism of neoliberal governments.

The UN’s approach to blame is against governments in the region unwilling to take refugees in. Nobody wants to see UN troops show up since they bring cholera & rape, but couldn’t the UN lease some ships to at least bring food, water, & medical personnel to the refugees?

Many refugees able to get into Indonesia arrived with serious health problems & there are several photos of skeletal, desperately ill people with IV drips laying in tents without even a mattress. This boy arrived in Indonesia without his family & is crying because he’s unable to reach them by phone. The need for PTSD counselors must be massive just for the 1,600 allowed to land.

There’s no question Myanmar, Thailand, Malaysia, & Indonesia come in for special condemnation but the UN & all those countries who belong to it don’t get to shake the naughty finger & walk away scot-free. Ecuador’s president Rafael Correa announced Saturday that the Community of Latin American & Caribbean States (CELAC) will provide assistance to the refugees. Thirty-three countries, several with great big economies, & including Cuba & Venezuela belong to CELAC.

“If the problem continues then we will provide our total support including food supplies as well as CELAC welcoming those impacted by the crisis in order to alleviate the tragedy that is taking place,” said Correa. How long does it have to continue before they send food?