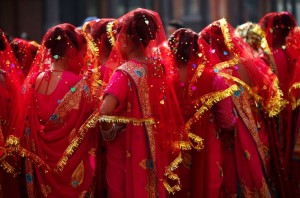 This must be the season of mass weddings since media is filled with photos of them, including one officiated by the pope. Several years ago, Sun Myung Moon, a self-proclaimed messiah, right-wing activist, showman, & cultist founder of the Unification Church, was vilified in media for holding mass weddings all over the world among his followers. Despite Moon’s grandstanding spectacles, it’s apparently an old custom going back at least as far as Alexander the Great in the fourth century BCE. Mass nuptials are held in the Middle East, Asia, Latin America, Europe, & the US. A lot of gays are now getting married at such love-ins.

The economic reasons for mass weddings are obvious: church weddings everywhere cost a bundle. It’s reported that less than half of Filipino Catholic couples have church ceremonies due to expense; the rest marry in mass civil ceremonies. There were 2,000 couples at one such ceremony. Last Saturday, 1,690 couples were married in Mexico City. A 2011 ceremony in India involved 3,600 couples, including Hindus, Christians, Buddhists, Muslims. It doesn’t get more ecumenical than that.

In this ceremony in Kathmandu, Nepal (on Feb. 8th), you can see mass nuptials are not dour events, bereft of beauty. That’s because love is in the air.