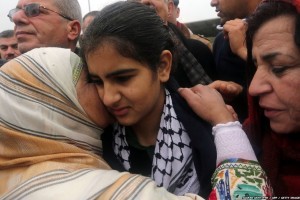 This is 14-year-old Palestinian schoolgirl Malak al-Khatib being embraced by family in the West Bank village of Tulkarem after her release from the Israeli gulag. She was arrested December 31st after getting caught picking up a stone. Under Israeli military law (employed only against Palestinians defending their lands & not against Zionist settlers trying to take it), stone throwing is punishable by up to 20 years in prison.

After Khatib was arrested, she was held three weeks before facing a judge in a military court where she was charged with stone throwing & possession of a knife. Is carrying a knife also illegal under Israeli military occupation? How about nail clippers or a pair of scissors?
Under a plea agreement she was given a sentence of two months, a $1,500 fine, & three years’ probation. For what exactly? Holding a stone? Israeli authorities claim she confessed that she “intended to throw stones at Israeli cars & was going to stab an official that tried to arrest her.” The confession of a terrified 14-year-old girl, without her attorney present, under interrogation by racist, hateful soldiers has zilch, zip, nada credibility that wouldn’t hold water in most kangaroo courts. As her father so brilliantly put it, “A 14-year-old girl surrounded by Israeli soldiers will admit to anything. She would admit to holding a nuclear weapon if she were accused.”

But there’s another legal problem. Shouldn’t she be charged for a crime she actually committed rather than one she allegedly only intended to commit? Are Israeli soldiers mind-readers now too? The case set off a fury of protests in the West Bank, not only because she didn’t commit a crime but also because there are now over 250 Palestinian kids being held in the Israeli gulag for throwing stones. She was released after serving 44 days of the two-month sentence for the alleged crime of thinking bad thoughts.

Media coverage of Khatib’s arrest is telling: the BBC caption to this photo said “Malak was jailed for six weeks for planning to attack Israelis.” The Guardian-UK article referred to “the Israel police’s Judea & Samaria division.” Actually Judea & Samaria hasn’t existed since the 8th century BCE; it is the name Israel gave to the West Bank to legitimize it’s Biblical claim to Palestine. Using language that legitimizes colonialism & occupation is a dead giveaway for bias. But at least the phony claim of objectivity in journalism stands exposed.