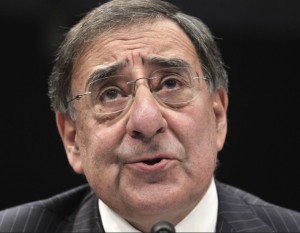 Normally I don’t concern myself with personnel matters in US regimes but it appears Obama has some problems with his Secretary of Defense–and when war is the primary industry of the US government that’s a whopper of a problem.

Last November, the current war minister, Chuck Hagel announced his resignation under pressure for some undefined issues about ISIL. But Obama hasn’t replaced him & he continues to hang around in hangdog fashion–a chastened & defeated man. I wish I gave a rat’s ass but public humiliation seems the least of what that schnook deserves.

So now Hagel’s predecessor, Leon Panetta is the guy they’re trotting out to speak about ISIL, acting like the minister of war & preempting Hagel completely. Panetta is a Mr. Magoo look-alike & hard to take seriously even when he saber-rattles. Something about him makes you want to slap him silly.

Is there some problem with US strategy regarding ISIL? Do they just not know what the hell to do with this monstrous situation they’ve created? Is it time to take this pack of murderous war criminals down & set up a government that everybody in the world doesn’t hate for just cause?