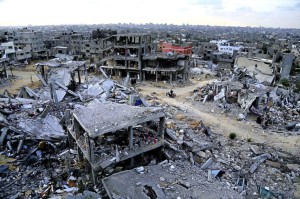 Last May, when Pope Francis stopped his entourage to pray briefly at the apartheid wall separating the West Bank from Israel, many heralded that as a symbolic, even unprecedented, gesture. He made another symbolic unprecedented gesture a couple days later when he stopped to pay tribute at the grave of Theodor Herzl, the founder of Zionism. The question arises: which symbolic unprecedented gesture carries more weight? Or it might be better to ask: which one is more useless? Judging from his silence during Israel’s Operation Ethnic Cleansing in Gaza, it could be argued the pope threw a couple good prayers away at that wall because symbolic doesn’t cut it when there’s a genocide involved. Neither does silence.

This symbolic gesture thing is getting carried way too far. Now we’re supposed to get all excited that Sweden & the British parliament have “recognized the state of Palestine”. Which state is that? Or more aptly, which bantustate is that? Gaza? Which Israel just spent seven weeks bombing to smithereens; which Israel holds in the grip of a murderous blockade; where Israel just maneuvered a leadership change as a condition to stop it’s genocidal rampage? Or is it the West Bank, while Israel continues expropriating Palestinian lands & moving in thousands of Zionist settlers from all over kingdom come to take over those expropriated lands?

The two-state solution is dead as a door nail & has been for a very long time. It is definitively buried in mountains of cement rubble that now cover the landscape of Gaza. In order to survive, Palestinians have to compromise & make temporary concessions in negotiations with Israel. But solidarity activists around the world do not have a gun to their heads. Every time one of these nations throw up another symbolic gesture–even of the unprecedented kind–we should stand steadfast for Palestinian justice–which is not a bombed out bantustate or an outpost in the West Bank. It is not the 1967 borders either. It is all of Palestine & a democratic secular state where Jews & Palestinians can live in peace. Some call that a pipe dream. It is more aptly called justice. And it is possible.

This photo is Gaza City which Sweden & Britain so proudly recognized as a Palestinian state. The pipe dream is thinking a bantustate could ever be a worthy alternative to justice.