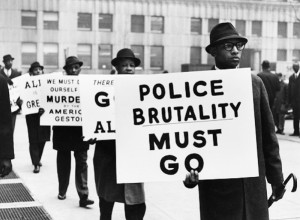 From the annals of the US Civil Rights Movement: a 1963 protest by Black Muslims against police brutality. The viral spread of Islamophobia in the US within the context of the war on Black youth raises questions about the history & political role of the Black Muslim movement here. Not all of that history is inspiring. Louis Farrakhan, the leading Black Muslim today, represents the right-wing trend within that movement. Malcolm X, who was murdered by government agents in 1965, represents the best of that tradition. His powerful speeches lacerating the racist power structure in this country remain the most incisive & uncompromising political critique of systemic racism. He spoke for Black working people & would not bend an inch in his mission. Nor did he ever fawn before power. That’s why they murdered him.

A new civil rights movement is forging in Ferguson, Missouri, where police gunned down another unarmed Black teen after Michael Brown. Protests have not ceased nor fearless challenges by activists to the racist power structure. It’s certain many of those activists are inspired by Malcolm X’s words which still resonate powerfully nearly 50 years after his murder & will continue to resonate until racism is destroyed–however long that takes & by whatever means are necessary.

It’s certain his words are educating the new generation of Black freedom fighters who will take the fearless, uncompromising political path he forged & reject the sniveling mis-leadership of people like Al Sharpton & Jesse Jackson shilling for the racist power structure. Like Che Guevara, Malcolm X will always be on the front lines of the struggle against racist violence & tyranny.

So while Islamophobes vituperate & denounce Islam as a religion of hate, Muslims can point to Malcolm X who was a fearless apostle of justice. Anger & hatred against injustice can never be maligned; they are the very soul of social transformation.