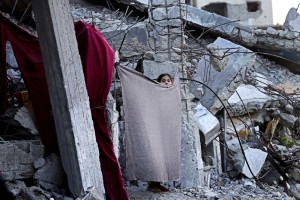 Homeless in Gaza City: this little girl is looking through the sheet that now serves as a door in her families bombed-out home. Delegates from 50 countries & 20 NGOs attended a donor conference in Cairo on Sunday to raise contributions to rebuild Gaza, which would include thousands of destroyed homes. Just removing the mountains of cement rubble will require millions in heavy equipment like bull dozers & back hoes.

Billions were pledged at the donor conference but no one should hold out high hopes all (or even most) of the money will actually be dispersed. Although it’s reported, no media has thought to investigate why billions are pledged for catastrophe & war zones like Haiti & Afghanistan & either it never gets dispersed or it’s used for other purposes like bribery & outright theft.

The media caption to this photo said the destruction is from “the war between Israel & Gaza’s militant Islamic group Hamas.” They’ll need a few extra back hoes just to take out the mountain of lies. This wasn’t a war; it was a genocide. And Hamas may be militant but they’re not psychopathic like the Israeli leadership.

This is where the massive international solidarity movement comes in. We need to evangelize the hell out of the economic & cultural boycott of Israel (BDS). If you want to make politicians in any country listen you have to squeeze their little pea brains until it hurts. BDS is already having a powerful affect on the Israeli economy & it’s international reputation. If Palestinians are to stand a chance of justice, intifada has to go international & exert massive economic & political pressure on Israel. That’s what solidarity is all about.