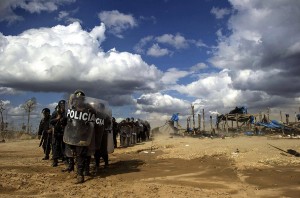 Some of the ugliest sarcasms of neoliberal economics are played out in the mining industry which runs operations on a scorched earth business model. There are many multinational corporations involved–US, Mexican, Canadian, Australian, Indian, Russian, Chinese. Their strip & open-pit mining practices have deforested & chemically contaminated millions of acres on every continent. Their recklessness has made entire regions uninhabitable for flora & fauna; destroyed migration routes for birds; contaminated rivers with acids, arsenic, mercury & other toxicities; created neurological & congenital health problems for thousands; destroyed the livelihoods of tens of thousands of farmers; & are making this beautiful planet a monstrous eyesore.

Peru’s economy, completely warped by mining, is a case in point. Peru is more than 60 percent Amazonian rainforest vital to controlling climate on Earth, but deforestation & land conversion for mining are turning it into a wasteland. Short-range profiteering is a fatal flaw of the neoliberal business model. Under scorched earth policies, Peru now depends on mining for 62 percent of its export earnings because the government has bent over backwards with incentives to mining companies. Investment in mining is now near $9 billion a year according to official figures.

While mining is a bonanza to the Peruvian elite, it is a disaster for farmers who are engaged in ongoing battles with riot police defending open-pit copper mines like the $1.4 billion Tia Maria operation contaminating fields, groundwater sources, crops, livestock. The company running Tia Maria is Grupo Mexico, the outfit that still hasn’t cleaned up its 2014 catastrophic spill from a copper mine in Sonora, Mexico.

For the past couple years, the Peruvian regime–while sending riot police to defend Tia Maria & other mines–have conducted police operations against illegal gold mine operations in the Amazon Basin of Madre de Dios bordering Brazil & Bolivia. Like storm troopers, they’ve burned down over 55 mining camps, blown up & confiscated equipment, closed down businesses in the area which serve miners. Most of the 40,000 wildcat miners are poor immigrants from the Andean highlands displaced by multinational mining operations going on there, most notably by a Chinese consortium.

No one ever said capitalism functioned rationally. In many African countries, the World Bank fosters artisanal & wildcat mining. Dispossessed & impoverished miners use low-tech methods to extract gold which they sell dirt cheap to an agent who sells it on the world market. Everybody makes out like a bandit–except the miners who suffer extreme health conditions.

Reports are vague about how wildcat mining operations in Madre de Dios are run. It’s likely that small companies hire workers to operate low-tech mines & then broker the gold for export because certainly the miners aren’t profiting–& illegal gold is now 20 percent of all gold exports from Peru, making it the world’s fifth biggest gold producer. Customs officials estimate the value at about $3 billion–more than export of Peruvian cocaine. Forty thousand miner shares of $3 billion would be a substantial income which the miners are not receiving but thieving brokers are.

There’s no question these mines should be closed down. All of them–not just the wildcat mines. It isn’t the environmental & health catastrophes, nor the displacement of tens of thousands of farmers that concern the regime, but that they aren’t getting their cut of the plunder from the wildcat operations.

Peruvian farmers & workers aren’t on this planet to serve as chattel for multinationals & they do not serve that role compliantly–which is why police repression is so severe in Peru. As long as there is continuing resistance to mining in Peru, there is hope. Our fullest solidarity with that resistance.

Photo is Peruvian riot police in La Pampa after one of their recent wrecking operations against wildcat mines whilst their comrades-in-arms defend the “legal” mines.