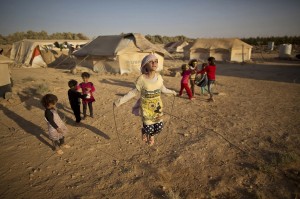 Muhammed Muheisen is an award winning photojournalist who has covered events all over the Middle East, including the Iraq & Syrian wars. He is most renowned for his images of Afghan child refugees in Pakistan. Muheisen is a Palestinian, born in 1981 in Jerusalem & schooled at Birzeit University near Ramallah in the West Bank. He is now a Jordanian national.

One judge honoring his work with Afghan refugee children said “He caught the hope, desperation, & tragedy of the faces of the oppressed.” That he does. Because the children he photographs are living in squalor. But what’s magical & powerful about Muheisen’s work is how he captures the beauty, vibrance, & humanity of children living in the most desperate circumstances.
His method isn’t just waiting for a candid, poignant moment to happen. He says he works slowly with his subjects to earn their trust–when they open up to him & the moment unfolds. That relationship is what transforms his images into something wondrous.

These are Syrian refugees (many who were Palestinian refugees in Syria) in a camp on the outskirts of Mafraq, Jordan near the Syrian border. The little girl skipping rope is 10-year-old Zubaida Faisal. There’s no question these kids have been through hell. What’s wondrous is not that Muheisen hides that reality from us but by showing us their spirit tells us something about what it means to be human–& why the human race is worth fighting for.