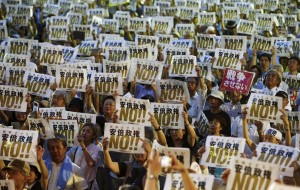 There have been protests of thousands for weeks against new military legislation being railroaded through the Japanese parliament. The proposed law would reverse Article 9 in the constitution outlawing the use of military for war. It’s essentially a “no war” article. It isn’t a pacifist commitment but was imposed by the US occupying regime after Japan’s defeat in WWII.

The reversal of Article 9 has been in the works for a while. Part of the railroading is coming from the US who want to incorporate Japan into an offensive naval & troop force as US competition with China heats up in the South China Sea & the proposed Trans-Pacific Partnership goes into effect. There is no shyness about acknowledging all this in the media. Forbes, a voice of US capitalism, & other media sources lay it out quite bluntly.

The question is, what does Japan have to gain from re-militarizing since, even with US military aid, costs & affects on society will be immense? There are no glib answers to that. Japan is not an impoverished country but one of the strongest economies in the world. It is however facing economic, social, & political crises like every other neoliberal capitalist country. They’re not re-militarizing only to address regional conflicts with Korea or only to buttress US military might but because war is inherent to capitalism. The need is built into the system to try to resolve its internal crises & volatilities–like Fukushima–through war. There’s an economy to war that serves the ruling elite but devastates the lives of working people.

These protesters in Tokyo are denouncing the proposed militarization of Japan. Why should they send their young people abroad to fight when their real dispute is with their own regime?
Our fullest solidarity with them.