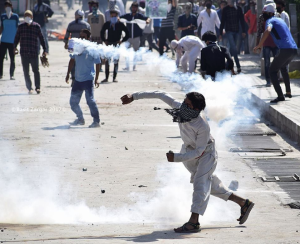 “A Kashmiri protester throws back a teargas canister at police & paramilitary men during clashes against the civilian killings in Srinagar,” according to Basit Zargar.

They’ve stood alone against a brutal occupation long enough. It isn’t enough to admire their toughness & tenacity. We have to find ways to stand with them, to educate others about their struggle, to become part of building an international movement demanding India end the occupation.