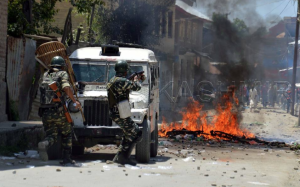 It’s hard to keep track of how many are killed in Kashmir every day. It’s a constant feature of life under occupation. Yesterday, it was somewhere between ten & thirteen people, including civilians, fighters, police, & soldiers.

But take a close look at this photo. There were widespread protests yesterday because unarmed civilians, young men, were killed. These troops with their high-powered rifles are being approached by people with their arms down, clearly unarmed.

It’s hard to fathom how Kashmiris can sustain such a level of resistance not just day after day but year after year but that is one of the things that makes solidarity with their struggle so important. You hear people bellyache that protests are ineffective because they’ve been marching a few years & nothing has changed. Kashmiris have been fighting against occupation since 1989 & colonialism since 1947. Intransigence against all odds is what changes human society, not defeatism. Finally, after so long, Kashmiri activists are seeing the results of their relentless work. If we support their struggles actively, if we follow their leadership, we can be part of ending human exploitation & oppression & making this world suitable for humans to live in.