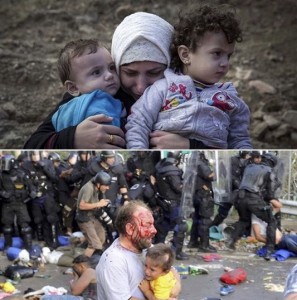 The young mother weeping & holding her children just spent five hours on a dinghy crossing from Turkey to the Greek island of Lesbos. The man with his child was injured when Hungarian riot police attacked refugees with tear gas, water cannons, & truncheons. The traumatic stress parents & children sustain dodging border patrols, crossing oceans in flimsy boats & enduring violence from criminal gangs & police must rearrange the brain cells in their heads.

Media, at the service of the European Union, would very much like to portray the refugee crisis as hordes of young men entering Europe–which is very much how they portray African refugees. It panders to the lowest levels of racism inculcated by colonialism & inflames ultra-right nationalists. But because of the nature of war & neoliberal colonialism, immigration & the refugee crises today are a family affair. The crisis on the US southern border is also very much women with children.

The central issue of World War I was competition between European nations over colonial division of the world–issues which remained unresolved in World War II. The current crises are a continuation of European & US attempts to politically & economically control immense regions of the earth where they have no damn right to be. It should be remembered that underlying the two world wars–& despite episodic military alliances–there were irreconcilable economic & political conflicts between the regimes involved. The US aligns with Russia & Israel today in support of Assad but such tenuous alliances can shift overnight.

This situation is not going to get better as Russia, Israel, the US, Australia, Turkey, & other regimes send weapons to Syria along with war planes, special operatives, even submarines off the Lebanese coast. Flight from the war zone will continue. But more importantly, those unable to flee will be subject to unspeakable military barbarisms. It is extremely threatening to the Palestinian struggle.

We should continue to demand our governments open the borders & provide assistance to find housing & social services as should be dictated in international law if it isn’t. The most imperative political need now is to re-assemble the international antiwar movement to demand no military intervention by any country into Syria & for Assad to stop bombing his own country.

(Photo of woman & children is by Santi Palacios/AP; photo of man & child is by Karnok Csaba/Reuters)