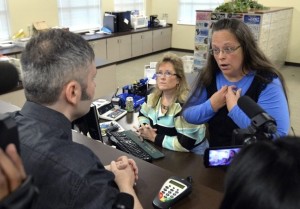 The lawyer for Kentucky country clerk Kim Davis, who denied marriage licenses to gay couples, reported yesterday on CBS news that his client met with Pope Francis at the Vatican embassy in Washington, DC, during his recent visit. A Vatican spokesperson initially dodged questions about the visit but told the NY Times he “did not deny that the meeting took place, but I have no other comments to add.”

According to the lawyer, the pope thanked Davis for her courage & told her to“stay strong.” They exchanged embraces, felicitations, & the pope gave her a rosary–even though she’s protestant.

There can be no possible objections to Pope Francis meeting with Davis or, for that matter, political opponents of funding Planned Parenthood, which is now being debated in the Congress. That’s his right, & if he believes birth control & homosexuality are evil, his duty to the church.

It is not anti-Catholic then to criticize Pope Francis when he enters the political arena. When he challenges the political rights of women & gays, are we to stand by silent in the interests of diplomacy & religious freedom? He can say whatever he wants from the pulpit & in his bulls but when he actively engages in politics, then he no longer acts as a pope, ex cathedra & all that stuff, but as a political opponent of women’s & gay rights. And we have a right & duty to respond sharply since it’s our rights he’s messing with.

That’s why the meeting with Davis was so hush-hush; that’s why he came & left the US without openly speaking against birth control. He would have lost a lot of enthusiastic support if he had–including from Catholics.