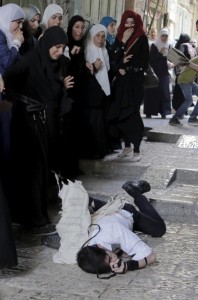 This photo is a classic case of the media conceit that doesn’t always outright lie but never tells the truth about Palestinians. It was taken about two weeks ago in the alleyways of the Old City in occupied East Jerusalem which lead to gates entering the Noble Sanctuary where Al-Aqsa mosque is located.

These entryways are the site of conflict between extremist Israeli settlers & riot cops against Palestinian worshippers & activists defending the mosque.
This is the area where extremist Israeli settlers threatened Palestinian women with bats in an attempt to rush the Al-Aqsa compound while Israeli riot police are using rubber-coated metal bullets, stun grenades, pepper & tear gas against Palestinians defending the mosque. In one video, Israeli police took after a Palestinian man coming to the defense of the women being threatened.

The Reuters caption to the photo read: “Palestinian women look on as an Orthodox Jew lays on the floor after he was attacked by other Palestinians during clashes in Jerusalem’s Old City.” More’s the pity! The kid shouldn’t have been there in the first place. If he got his ass kicked for trying to enter & vandalize the mosque, tough noogies!

Why don’t media show what these often-armed settlers do to Palestinians in the West Bank? What about the torching of Palestinian homes & mosques, the destruction of their water wells & farm lands, the assaults & brutalizing of their kids?

Hopefully the schnook wasn’t hurt too bad though baby Ali Darawshe burned to death when such extremists torched his family home.

Build the economic, cultural, & academic boycott of Israel; demand no aid of any kind to Israel.