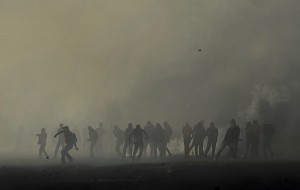 There have been a reported 25,000 people disappeared in Mexico in the past decade which the government attributes to the drug cartels. Of course the criminal cartels are integrated into Mexican capitalism & indistinguishable from each other—two flanks of the same rotting system bankrolled & armed by the Pentagon cartel in the US.

Teachers in Mexico have been among the most militant activists & many have had to flee to the US as undocumented workers to escape assassination & disappearance. It’s no accident that the Mexican military, which has 60,000 soldiers deployed along with paramilitary thugs, targeted student teachers when they disappeared 43 activists on September 26th 2014. These protesters are student teachers from Ayotzinapa teachers college in Guerrero state facing off against riot police to protest the disappearance of their 43 classmates.

So many become overwhelmed by the scope of repression & violence in the world & declare the human race a failure rather than see that capitalism has failed human beings. We only need look to these student teachers defying repression & terror—or to the stone-throwers of Kashmir defying the brutal Indian occupation, the Palestinians standing against Israeli terrorism, or Black activists against US terrorism in their communities. They are the hope of the future. If the terrorized & oppressed have not given up on justice, neither can we.