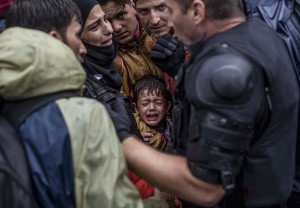 There’s an important change in photojournalist documentation of the refugee crisis in the eastern Mediterranean. There are now frequent photos of refugees in extreme distress. That would be expected on the Hungarian or Croatian borders where they are being violently assaulted by border guards & denied entrance–at a point in their journey when their psychic energies & resources must be completely drained. This poor little guy is with his family in Tovarnik, Croatia, trying to board a train to northern Europe.

But we’re now seeing photo after photo of distressed refugees in the Aegean leg of the trip traveling mostly in dinghies from Turkey to the Greek islands. Many are swimming to shore from overcrowded or disabled dinghies, are weeping & fainting when they land, some are in apparent shock. More alarmingly, there are more frequent reports of plastic dinghies sinking & refugees drowning.

Media reporting on the crisis is so half-assed that one can’t tell if the situation is worsening dramatically. But the increasing drowning rate along with reports on CBS news that Turkish & suspected Greek coast guard boats are harassing & disabling the dinghies would suggest refugees are more endangered than before & need active solidarity more than ever.

Bernie Sanders expressed opposition to immigration & open borders because it threatened the nation-state. Interesting objection because the European Union is a failed experiment that tried to overcome the limits of the nation-state in the interests of capitalism. It’s apparently working out well for some of the German banks but it’s proving a disaster for working people & proving itself barbaric & xenophobic when it comes to the refugee crisis.

Of course European governments are overwhelmed with thousands of refugees who need housing & social services–especially when they’re operating under austerity policies & can’t provide them for their own citizens. Perhaps it’s time working people decided the nation-state isn’t working for us, ally ourselves with refugees, & come up with a social structure that can serve human needs.

The “gray out” of news on the crisis of African refugees from Libya to Italy continues except for reports that drownings continue. Still no word what the hell those 26 European navies are doing out there.