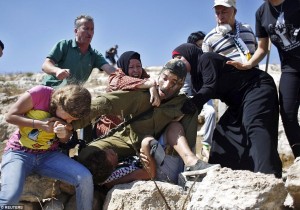 Bassem Tamimi (on the top left in the green shirt) is a leading Palestinian activist–along with the rest of his extended family engaged in weekly protests against Israeli settlements & the military occupation in the West Bank town of Nabi Selah. He’s been arrested by Israeli soldiers numerous times. His cousin Mustafa Tamimi was killed in a gruesome incident in 2011 when he was hit by an Israeli grenade & his brother-in-law was shot & killed in 2012 by Israeli soldiers.

The memorable incident in this photo is an Israeli soldier brutalizing his young son while he, his daughter Ahed (known to many for her defiance against Israeli soldiers), wife Nariman, & others come to the boy’s defense.

He is presently on a speaking tour of the US so many can get an opportunity to hear a powerful voice of the Palestinian struggle.

The link is the schedule of his speaking engagements in the US. He’s presently in the Bay area of California but will proceed to Albuquerque, NM; Boston, Massachusetts; Florida; & Washington, DC.