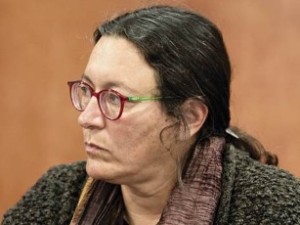 The conference was likely awash in pomposity, self-congratulating moral superiority, & high-flown rhetoric as participants ponderously discussed how to make Israel & Zionism a kinder, gentler version of colonialism & racism–knowing full well they’re on a fool’s errand. Can’t be done. If they’re liberals & won’t face up to that, why should we play stupid to stroke their vanities?

This is where that redoubtable stuff comes in. Hass–who publicly opposes the occupation & refutes the “stabbing Intifada” narrative–moderated a panel on “struggles for equality” in Israel. She directly addressed the fatal flaw of the Zionist project: the infamous Israeli Law of Return where any Jew anywhere in the world can immigrate to Israel or settlements in occupied Palestinian territory & get citizenship & democratic rights denied Palestinians born & raised there. Palestinians aren’t even allowed to enter Israel proper or move freely around but must traverse an apartheid wall & negotiate numerous checkpoints on the roads.

Hass called Jewish aliyah (immigration) to Israel a crime, identified Israel as apartheid, & said “Jewish immigration to Israel is a conscious choice of partnership in the dispossession & expulsion of Palestinians & the establishment of apartheid in practice.”

Amos Schocken, the publisher of Haaretz, was asked to respond to Hass. He said “…if it turns out that Zionism is not democratic & its existence depends on occupation, dispossession, & apartheid…then it becomes an illegitimate ideology.” Nothing like playing stupid. Just how much documentation does liberal Zionism require? How much Palestinian land confiscated? How many Palestinian kids in the Israeli gulag? How many bombs dropped over Gaza? How many Palestinians shot dead by Israeli troops? How many decades the occupation? How many more years of vilifying Palestinians as terrorists?

The hope of the future for a democratic secular state where Jews & Palestinians live as brothers & sisters depends on Palestinian Intifada & tough-minded democrats like Amira Hass. Our role is to assemble the forces of international solidarity & to honor & build BDS to strengthen the struggle against the racist, supremacist doctrine of Zionism.