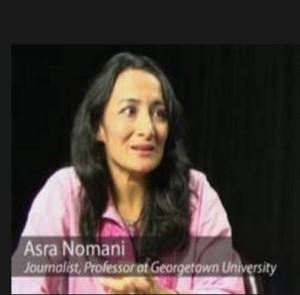 Nothing fries hard-boiled feminists more than seeing the rhetoric of women’s liberation incorporated into Islamophobia–the ideology of the so-called War on Terror. A central feature of that cooptation & war-mongering focuses on liberating Muslim women from the hijab–if necessary, by bombing their countries to smithereens.

The preoccupation with the veil worn by Muslim women is not an expression of solidarity against women’s status but a hackneyed form of misogyny–& not a very well disguised one. Thousands of women in niqabs & hijabs led Arab uprisings in Egypt, Yemen, Bahrain, & elsewhere & are on the front lines in places like Kashmir & Palestine, & monkey-faced feminists in the US or Europe are going to call them out for being male-dominated? What can possibly be of concern if women, for religious or any other reasons, choose to wear a veil? The fetish only makes sense politically–when it’s understood as targeting women for attack.

Right-wing, war-mongering feminism–very often, but not always, associated with Zionist feminists–was riding high because of the weakness of both the feminist & antiwar movements in the past decades. The recent vote by the National Women’s Studies Association (NWSA) to support BDS in defense of Palestinians is just one sign that the equilibrium of reactionary politics within feminism is cracking & feminism’s original association with antiwar politics is being regenerated. This presents a problem for the war makers & propagandists.

Enter the ubiquitous Asra Q. Nomani & her sidekick Hala Arafa, two retired conservative journalists trying to jumpstart a second career as Muslim media authorities on the inherent violence & misogyny of Islam–not ‘radical Islamism’, but Islam. Nomani is one of the 12 recent initiators of the Muslim Reform Movement (MRM) which (at least on the surface) appears to model itself on the Protestant Reformation by recently nailing its manifesto to the door of a Washington, DC mosque associated with Saudi Arabia.

Reform movements within religions are the very dynamics of religion. Some are consequential; others a flash-in-the-pan. The MRM manifesto is straight out of the enlightenment, with the inclusion of women’s rights. Everything looks so copacetic. One could claim it isn’t Nomani’s fault so many Zionist publications tout her articles critiquing Islam, but when you read the articles you find they’re indistinguishable from the most arrant Islamophobic propaganda. In 2010, Nomani actually argued for religious & racial profiling of Muslims. That helps explain why she would appear in venues like the Bill Maher show or Jerusalem Press Club or why she’s carrying her reform message all over US media rather than to the faithful at the mosques.

Nomani just overplayed her hand & exposed her agenda (again) when she & Arafa published a December 21st article in the Washington Post titled “As Muslim women, we actually ask you not to wear the hijab in the name of interfaith solidarity.” In a remarkably stupid & disingenuous article, the two women evoke feminism to argue that teens & others wearing hijab as solidarity gestures with Muslim classmates are counterproductive & feed misogyny within Islam. Take a moment to catch your breath that two elite retirees would eschew active solidarity at a time when aggressive & violent incidents against Muslims, in particular Muslim women, are increasing around the world & hate-mongering is becoming deafening on US television. In some places like Myanmar, Muslims are subject to pogroms.

Nomani claims “Islamic feminism is the antidote to Islamic extremism.” Sounds good. But what is the antidote to anti-Muslim pogroms? Or to wars justified by extreme Islamophobia? The MRM claims they stand for “secular governance, human rights, including women’s rights, & peace.” Voltaire couldn’t have said it better. So why is Nomani insistently equating Islam with extremism at a time when Muslims are under attack? And why is she associating with reactionary political forces rather than helping build the antiwar movement?

Nomani is a hell of a bore to listen to but with her faux, overwrought air of sincerity, she’s taking people in. She does not represent the progressive forces of feminism but the reactionary forces of social hatred & war-mongering. The reform of Islam is a religious matter. The veil is nobody’s damn business but the women who wear them. Feminism is a ‘come as you are’ affair & doesn’t have a dress code.