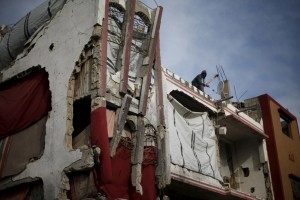 Wherever did the Guardian-UK acquire its reputation as liberal media since it’s proven itself an inexhaustible source of foolishness when it comes to Palestinians? The caption to this photo last week said, “A Palestinian man stands on the roof of his house which was damaged by what witnesses said was Israeli shelling during last year’s 50-day war.”

Are those witnesses sure the damage was done by Israeli carpet bombing? It could have been done by evil fairies invading from outer space. In fact, other witnesses are certain they saw what appeared to be Martians invading Gaza.

A year-&-a-half after the barbaric siege of Gaza & the Guardian still thinks it can pull off this imbecilic equivocation to cover for Israeli ethnic cleansing. Even Israel doesn’t deny its barbarism but only justifies it. After plying a panel of retired generals from the Pentagon & other psychotic military establishments with alcohol for a year, Israel finally got them to conclude the Israeli military conducted its massive bombing spree of Gaza in 2014 with admirable restraint & humanitarian consideration. You can’t make that crap up. You pay the right people & add in some booze, they say exactly what you tell them to.

There’s something of a news gray-out about ‘what the evidence says is an Israeli pogrom against Palestinians in the West Bank, East Jerusalem, & Gaza’. While Palestinians hold their ground & grieve their losses, our job is to put the lie to all this & build the hell out of BDS.