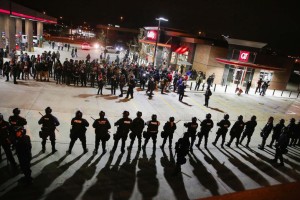 Something momentous & historical is emerging in Ferguson, Missouri: the rebirth of Black power after two unarmed Black teens were gunned down by police. There are hundreds of Black kids across this country murdered by police in a governmental war on Black youth which includes massive incarceration for minor offenses. But media ignores all this & masks racism with pity in stories about “Black on Black violence”, teen pregnancy, drug gangs, & fatherless families–adding up to an image of lawless dysfunction in the Black community.

Black “leaders” like (Reverends, my ass!) Al Sharpton & Jesse Jackson rush to outbursts in the Black community not to lead opposition to systemic racism but to peddle voting as an alternative to independent Black political action that would drive these assaults back. Black power is what is needed, not another wimpy-assed, mealy-mouthed Democrat in Congress, like the kind that make up the Black Congressional Caucus.

What makes the Black community of Ferguson so momentous & historic is that despite the intervention of Sharpton & Jackson to rein in militance, they are forging a Black power movement & turning their backs on compromise & those who counsel it. Not only do they continue protests & legal challenges to the cops, but at a meeting last weekend, 3,000 people gathered in a St. Louis arena to hear the NAACP & other Black mis-leaders speak. A section of that crowd, described as the youth, stood up & turned their backs on the president of the NAACP & started chanting opposition. Some commentators have called this an “intergenerational” conflict & it may well be lead by youth. But these establishment civil rights organizations have been dormant for a few interminable decades & there are plenty of older people just itching to engage in struggle against the violent assaults on their kids.

Media reporting of the emerging movement in Ferguson has been grotesque, as usual when reporting on the Black community. They claim protests become violent “when demonstrators & police clash.” That’s like saying cops murder unarmed Black teens when they put their heads up against the barrel of their guns. Protestors are unarmed & demanding their rights under the US Bill of Rights to protest on-going police brutality. The caption to this photo read: “The St. Louis area has been struggling to heal since riots erupted in suburban Ferguson following Brown’s death.” Riots!? That’s what they call exercising your rights in the Black community to justify police assault. “Struggling to heal?” You send phalanxes of riot cops to a healing!? Is that like Obama sending marines to address the Ebola epidemic?

Missouri officials & media are extremely concerned about those “outside agitators” converging on Ferguson. They damn well better get used to it. St. Louis is the epicenter of an emerging Black power movement. Political resistance in the Black community has always been countered with extreme police violence, as we witnessed in the Civil Rights & Black power movements. This emerging social movement is of the greatest consequence to overcoming violent systemic racism in the US & like the Civil Rights movement, it is a call to arms demanding active solidarity across this country. Those who can, should hot foot it to Ferguson to stand with the Black community; those who can’t, should help organize rallies, speak-outs, protests in their own cities.

There will be no social transformation in the US without the leadership of Black activists, including Black women, steeled in uncompromising struggle against racism & every form of social hatred. To be part of that momentous cause requires standing with the Bill of Rights & with the Black community in Ferguson, Missouri.