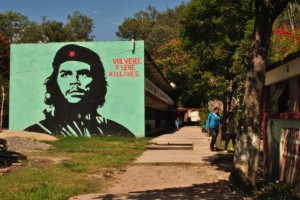 It’s hard to get the story straight about what happened (on September 26th) in Iguala, Mexico in the state of Guerrero (where Acapulco is located). There are a few different versions & the least reliable & most contradictory come from Guerrero state officials who are likely involved up to their eyeballs in the deadly assault on busloads of student teachers.

We can dismiss with contempt suggestions the students were linked to drug traffickers or leftist guerilla groups. Almost no one, even in the state & federal governments, denies that corrupt local cops linked to the drug cartels ambushed the students, murdered six, injured 17, & handed 43 students over to criminal thugs. We can only shudder at the fate of those students, given what Mexican military, paramilitary, & criminal thugs have done to undocumented immigrants from Central America attempting to get to the US. They are often tortured, mutilated, executed, dismembered, & dumped in mass graves.

A mass grave holding 28 incinerated bodies was found (on Oct 4th) near the ambush site & many suspected they were among the 43 missing students. Originally, the Guerrero state attorney said it probable the remains were some of the missing students but DNA testing to confirm their identities could take a couple months. Only a few days later the state Governor Ángel Aguirre Rivero told the press, “I can confirm that some of the bodies recovered are not those of the normalistas,” but he was unable to say how many had been identified. Just hours later, Mexican Attorney General Jesús Murillo Karam contradicted Aguirre Rivero & said, “I don’t know what information the governor claims to have. I’m monitoring this case closely, & I can tell you that none of the recovered remains have been identified.” Who the hell is in charge there? Now on Tuesday, Murillo Karam announced that DNA testing conclusively proved the incinerated human bodies were not the students. Raising several questions: how did the DNA testing expected to take several weeks get done so fast? And if it wasn’t the student teachers, who were the 28 so mercilessly executed?

No media source has explained why the student teachers would be targeted except to describe the violent political climate in Guerrero due to drug trafficking. It has the highest homicide rate in Mexico & in August 2014 the US State Department issued a travel advisory to US citizens calling Guerrero “the most violent state in Mexico in 2013.” Guerrero is also a center for the emerging civilian self-defense movement in Mexico in response to state & drug cartel violence. Some of these armed citizen groups claim government forces sent to reinforce their efforts against organized crime have sided with the cartels.

Government officials are falling over themselves blaming the ambush on drug cartels but of course for the Mexican government “drug cartels r us”. As part of the three-ring-circus to evade culpability, the federal government opened an investigation into who ordered the hit. All guilty fingers are pointing at organized crime & Iguala mayor, José Luis Abarca, who has long been accused of sharing municipal authority with the local drug cartel, Guerreros Unidos. He must have expected the accusation since he immediately claimed he was out dancing with his wife, who is also associated with organized crime, & then both went on the lam & are nowhere to be found.

But that still doesn’t answer why the student teachers were targeted. The students were from Escuela Normal de Ayotzinapa, a rural teachers college with a radical & activist student tradition. The ambush came as students returned to their campus from a day in Iguala soliciting donations for school supplies & raising money to get to Mexico City for the October 2nd memorial protest against a government massacre of students in 1968. One unsubstantiated report claims they were also at a protest against government education reforms.

While not substantiated, that connection to teacher & student protests against the education reforms points to another possible reason the student teachers would be attacked. The reforms instituted by the Mexican government in September 2013 are a major assault on public education, teachers, & teachers unions. Under the guise of professionalizing & standardizing education, they are an attempt to privatize public schools & break the teachers unions & would leave the teachers completely vulnerable before the state. Guerrero teachers & student teachers have been in the forefront of national opposition to those reforms. Just a few weeks ago, at least 50,000 people protested those reforms in a march in Mexico City so the opposition remains a dynamic movement.

Teachers in Guerrero have been out in force protesting the executions & disappearance of the 43 students. With fury & courage they are protesting, occupying government buildings, & set fire to municipal headquarters in Chilpancingo, the state capital of Guerrero only 55 miles from Acapulco. They’re blocking major highways & have taken control of the tollbooths all over the state in what is called a major civil meltdown. Today they called a protest in Acapulco where thousands from all over Mexico were expected to participate. Organizers said their goal was to “paralyze” Guerrero by seizing control of every one of the state’s 81 county headquarters, the state highways, & the airport.

There have been tens of thousands protesting in 19 more of Mexico’s 32 states & at Mexican embassies in nine other countries. It has snowballed into a major national crisis for the corrupt Mexican President Enrique Peña Nieto who has been twittering condolences up a storm to cover his own ass for culpability.
The stakes are high for the Mexican government, organized crime, international banks laundering drug money, & neoliberal profiteers so the teachers & broader forces of justice in Mexico are up against a mighty edifice. Their strength is in numbers, in justice, & in international solidarity.

Photo of the Ayotzinapa campus suggests the political character of the school which educates mostly rural & indigenous students.