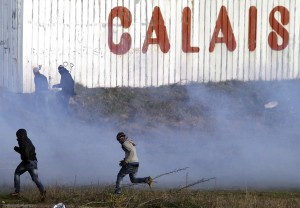 Anyone who didn’t just fall off the turnip truck knew French president Francois Hollande was grandstanding when he promised to take in 30,000 refugees after the attacks last November & when he promised to invest $53 million for refugee housing. Our man is obviously a political weasel & cannot think socially. We know that from his policies of the past several years toward Roma–evicting them from longtime settlements, razing their shanties, & deporting them to Romania where they did not come from, in violation of EU visa-free policies.

We also got confirmation of that from the treatment of refugees on the Italian-French border over the past few years. French gendarmes blocked entry, forcibly removed refugees, & in one instance stopped & boarded a train, removed all refugees & deported them back across the Italian border.

Those who managed to get across the border ended up in squalid makeshift camps without basic social services like toilets, food, medical assistance, & the Hollande regime would send in demolition crews to take down the camps near Paris & in outlying areas. Many refugees including women with children, elderly, infirm, & disabled ended up living on the streets.

Hollande’s barbaric treatment of refugees at Calais may not be more egregious than it has been all along but it is certainly raising questions about racist distinctions in selecting which refugees will be granted asylum & which will be hassled, incarcerated, & deported. Those refugees massing in Calais because they are unable to move forward to the UK appear from photojournalist accounts to be in their majority Africans, refugees who entered on the north Africa to Italy route. Are they being processed differently than other refugees? Are they being subjected to more violence?

The EU is not forthcoming about the numbers of refugees each country is accepting, about the asylum process, or about the criteria for who will stay & who will face deportation. But Hollande would not be the guy to put in charge if there is to be any measure of propriety even by low EU standards.

This is winter. The temperature in Calais today is 10 degrees Celsius/50 degrees Fahrenheit. These are refugees running from tear gas thrown by French gendarmes as bulldozers move in to raze their tents. This is documentation of human rights crimes against refugees & violations of several international laws governing the treatment of refugees.

Immigration is a human right. Open the borders!