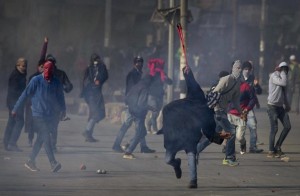 Kashmir, the other Intifada: without identification, it would be impossible to distinguish this photo of Kashmiri opposition to Indian military occupation from one of Palestinian opposition to the Israeli occupation. These youth are protesting today in Srinagar against the murders of 20-year-old Shariq Ahmad Bhat & 25-year-old Parvez Ahmad Guroo on Wednesday & Indian police are firing tear gas & rubber bullets to disperse them.

There is a political, economic, & military nexus between India & Israel that inextricably links the struggles for self-determination of Palestinians & Kashmiris. In 2014, bilateral trade between the two countries, excluding military sales, stood at almost US $5 billion, including $45 million in blood diamonds from Israel. (The breakdown is exports from India to Israel: $2,241 billion & exports from Israel to India: $2,286 plus the $45 million in diamonds.)

Since the 1980s Israel has been one of the world’s top arms producers & exporters with an estimated $7.47 billion a year in sales. Israel shrouds these transactions in secrecy but it has for decades operated as a US proxy in armament deals to oppressive regimes like Guatemala & Colombia, & conducts freelance profiteering in countries like apartheid South Africa & Iran under the Shah. Military links between India & Israel have grown exponentially since Modi took power in May 2014. The current 41 billion rupees (US $659 million) of Israeli arms sales to India is more than Israel’s total military exports to India for the three years before Modi took power.

Israel’s counterinsurgency training services to India go back over a decade. It has trained thousands of Indian commandos in the brutal methods used against Kashmiris & others in India because Israel was founded by death squad battalions & has perfected its brutalities on the bodies of Palestinians.

Both India & Israel are central to US geopolitical designs & the nexus between them includes the Obama regime & the Pentagon which have brokered military contracts worth billions with both countries.

Incorporating Kashmiri solidarity into Palestinian solidarity does not weaken either but strengthens both & helps expose the roles played by India, Israel, & the US in violently opposing democracy around the world.