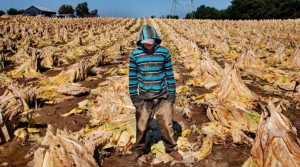 This is a child tobacco worker in the US where child labor is legal for industrial farmworkers & where there are an estimated 800,000 child farmworkers. In 2012, an initiative from the Department of Labor (DoL) to institute protective & safety laws for child farmworkers was vigorously opposed by the Obama administration which mandated the DoL never raise the issue again. Neither of the US labor federations did a thing to oppose this. Obama’s politics are a seamless whole–from war & drone bombing to child welfare.

Wisdom Blow has just reposted this article I wrote in 2012 on child labor explaining its place in neoliberal capitalist economics–the economics of war & sweatshops. Child labor serves primarily to undercut & disempower adult labor, create a compliant exploitable workforce, & eliminate all rights & safety protections for workers. It is a scourge, not a necessity & building strong, democratic unions is the alternative. Child labor is not just a human rights issue, but a labor issue.