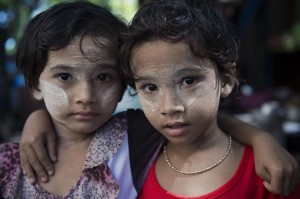 Frequently we need to step back from the news of war & genocide which seem so daunting, so impregnable to political resistance. We cannot let ourselves be overwhelmed by military arsenals that can take out the planet & are not averse to that option if oligarchic interests are threatened.

We have too much at stake to let our beautiful planet be destroyed by greed, by colonial predation, by racism, misogyny, & other malignant ideologies. We have children to think about–& their right to inherit a world suitable for human beings to live & love in.

These are Muslim children (not Rohingya Muslim) in Myanmar who live in squalid slums because of decades of discrimination–much of it fomented by British colonialism. Only the most contemptible ideologies could consider them inferior to anyone.

Our fullest solidarity with the Muslims of Myanmar.