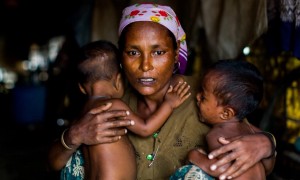 Aung San Suu Kyi & her National League for Democracy party (NLD) await official results giving them a landslide victory in the Myanmar elections. This is not, as media proclaims, a landmark, whoop-dee-doo moment for democracy since the NLD will be power-sharing with unelected military officials. The junta is still in full control–including over who won the elections & what they will be allowed to do once in office.

It isn’t democracy that marks these elections but exclusion of nearly five million Muslims from voting. Suu Kyi & the NLD claim their policy is human rights & democracy but would not allow Muslim members to run as candidates. She did however urge Muslim party members to campaign for her among Muslims not completely disenfranchised like the Rohingya.

The NLD admitted it kept Muslims off the ballot because of pressure from the ultranationalist Buddhist movement linked to the military junta orchestrating the genocide of Rohingya. Suu Kyi campaigned in the state of Rakhine but skipped the northern region where Rohingya Muslims face pogroms & live in concentration camps because the junta had rendered them stateless & ineligible to vote.

What kind of human rights candidate ignores genocide, the denial of religious freedom, or disenfranchisement of millions based on their religion or ethnicity? What kind of democracy candidate plays ball with a military junta, with international forces of exploitation, & promenades as the progressive face of military dictatorship rather than denouncing it? The distinctions between Suu Kyi & Hillary Clinton get lost in stinking miasmas of cynicism.

Photo is Shamijder, a Rohingya Muslim, & her one-year-old twins whose lives are not one whit safer as a result of the electoral victory of Suu Kyi & the NLD.

Our fullest solidarity with the Rohingya in their struggle against genocide. Suu Kyi & the NLD can go to hell.