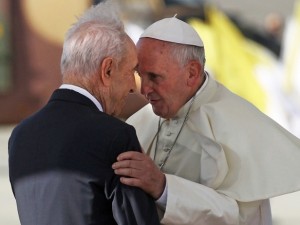 There was some amicable disagreement when Pope Francis stopped at the apartheid wall to say a Hail Mary on his trip to the West Bank & Israel last month. Some considered that act supportive of Palestinian justice. I don’t like empty gestures that much. Prayer is good, especially if combined with outspoken commitment to Palestinian justice. But praying doesn’t exempt you from taking a stand with justice.

Pope Francis proceeded from the apartheid wall to join Netan-psycho-yahu & Shimon Peres (president of Israel & former paramilitary death squad leader) at the monument to Theodor Herzl, the founder of Zionism who inspired the monstrosity that is Israel. One media source said: “It was a finely balanced gesture on the last day of the pontiff’s visit to the Holy Land, where even the smallest acts are fraught with political symbolism”–a statement that manages to flatter the pope for banality & at the same time, insult the intelligence of Palestinians & Israelis. In fact, from empty gesture the pope moved to an affront & betrayal of Palestinians. Because even the pope, with his hot-line to heaven, cannot have it both ways.

So where does Pope Francis stand today on Israeli ethnic cleansing in Gaza? Is he sporting a keffiyeh or is he standing with tens of thousands of men & women around the world demanding “stop the massacre in Gaza”? Actually he’s chatting it up with Shimon Peres in the most meaningless exchange of pietisms & false religiosity that we’ve seen since the last time he met Peres. And they also exchanged regrets about the “small group of fanatics who are the cause of suffering in Gaza.” Ethnic cleansing never came up. Reality never came up.

You always want to give the pope a break; nobody wants to excoriate a holy man. But nobody wants to be made a fool of either. Nobody wants to pretend when Pope Francis talks about praying for peace but refuses to take a stand against genocide, that he is just too holy to face political reality & really does have his head in the clouds. Nobody thinks he’s that stupid–or for that matter, that holy.

Nobody with a conscience gets to turn their backs on the people of Gaza spouting platitudes & banalities, abstractions & evasions.

I deeply regret if I offend people for my criticism of Pope Francis but if he calls himself a leader of the faith, then he has to act like a leader & not like a man lost in the wilderness or worse, a flunkey to the status quo.

(Photo is Shimon Peres greeting Pope Francis during the latter’s trip to Israel in May, by David Buimovitch/AFP/Getty Images)