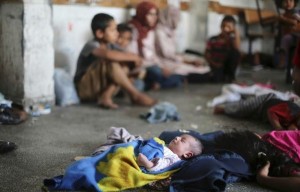 If we want to know where neoliberalism is dragging this planet, we need only look at Israeli barbarism in Gaza. Those few world politicians (it is such a misnomer to call them leaders) who speak about Israel’s slaughter in Gaza rant support for genocide without even a scintilla of squeamishness about blood rolling in the streets. The rest stand like mute oxen lest they endanger their secret defense bargains with Israel. Wearing a keffiyeh scarf around your neck, wringing your hands in discomfort for benefit of reporters, running around like a chicken with your head cut off trying to broker a ceasefire do not substitute for outspoken denunciations of ethnic cleansing or for mobilizing every resource your government can muster to compel Israel to stop the slaughter.

Just a week ago, the UN was up in arms denouncing Hamas far & wide when they discovered a cache of rockets stored in one of the vacant schoolhouses they use for refugee asylums in Gaza. It could be said they went ballistic, launching an investigation & even informing Israeli officials. They were talking tough: the UN “has reinforced & continues to implement its robust procedures to maintain the neutrality of all its premises, including a strict no-weapons policy & regular inspections of its installations, to ensure they are only used for humanitarian purposes.”

Today, for the fourth time in two days, Israel bombed one of the schools serving as shelters where the majority of refugees are women, children, elderly, & disabled. According to the UN official in charge of UN refugee facilities in Gaza, they received no evacuation warning before Israel bombed the school in Beit Hanoun, just a few miles across the border from the hills of Sderot, Israel where they watch these horrors in genocidal delight. The UN official said they told the Israeli military several times to warn them so they could evacuate the refugees & their own staff.

The schools are all marked with a UN flag; more importantly, in this case the UN official tweeted that “Precise co-ordinates of the UNRWA shelter in Beit Hanoun had been formally given to the Israeli army.” So the Israeli army knew just where to pick those women & children off. That’s called ethnic cleansing, bought & paid for by the US government in collusion with all those regimes that remain silent, hoping this too will pass, & they can continue to make hay on deals with Israel.

We await with hopeful anticipation for Ban Ki-moon to stop wringing his hands & come out ballistic in condemnation of Israeli bombers violating the neutral premises of the UN refugee centers, of Israel violating every international law on the books governing human rights. After all, what’s a cache of undeployed weapons in a vacant building compared to bombing a schoolhouse full of kids, old people, & people in wheelchairs? Will we wait in vain for Ban Ki-moon’s indictment? Most likely–& even though many UN relief workers have been shot & killed in Gaza by Israeli forces.

This isn’t the first time Israel bombed refugee centers in Gaza; they did so also in the 2009 siege of Gaza. Forty-three people, mostly women & young children, were killed when Israel fired white phosphorous bombs at a school shelter in Beit Lahiya (near Beit Hanoun). Obama expressed his deep concern over the deaths but never wavered in support for Israeli ethnic cleansing & Israel had the criminal temerity to identify nine of them as Hamas militants.

Support the economic boycott of all Israeli products (barcode beginning 729); support the cultural boycott of Israel; & keep the rallies massive demanding “Stop the massacre in Gaza!”