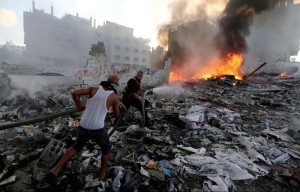 Zionists are having a hell of a time explaining away the overwhelming photographic evidence of Israeli war crimes & genocide in Gaza. After three weeks of damning Hamas for thousands of rockets they still can’t come up with documentation of property damage in Israel that would hold up in petty claims court.

Not unlike US rationalizations for Afghanistan & Iraq, media–from main stream to the most crackpot Zionist–are fumbling for explanations that will fly & when they can’t find one, they just improvise & make stuff up. Fiction competes with farce because Zionism has reached the limits of credibility.

Originally Israel justified genocide by claiming it had to stop those Hamas rockets. Now the Associated Press (AP), relying on sources like the Israeli military & Netan-psycho-yahu, tells us the bombing & ground invasion were necessary to take out Hamas tunnels. Not the smuggling ones between Gaza & its border with Egypt (which Egypt long-since destroyed by flooding with sewage) but tunnels between Gaza & its border with Israel. Netan-psycho told Ban Ki-hopeless-moon that Hamas built “terrorist tunnels” under Gazan hospitals, mosques, schools, homes to penetrate Israeli territory & kill or kidnap Israelis.

The editorial board of The Washington Post will not be outdone by flunkeys from the AP & elaborated on the tunnel defense for genocide. The editors claim Hamas tunnels leading from Gaza to kibbutzim in Israel have entrances in residential areas like the Shijaiyah district of Gaza City. That’s why last week Israeli bombs leveled the district, leaving hundreds of bodies buried in cement rubble or lying on the streets. That’s why they shot at medics trying to rescue the survivors & gather the remains. The editors claimed Israel found another tunnel underneath al-Wafa hospital, along with a Hamas command post & weapons arsenal. That’s why they had to take the hospital out too.

The editors allege these tunnels are constructed with cement but didn’t explain where in the hell Hamas got the cement since the Israeli blockade prohibits building materials, specifically cement, & has only allowed entry to a small tonnage earmarked for UN projects. Is the UN now working with Hamas in building those tunnels?

The Washington Post editors don’t know when to stop & they go on: “The depravity of Hamas’s strategy seems lost on much of the outside world, which–following the terrorists’ script–blames Israel for the civilian casualties it inflicts while attempting to destroy the tunnels.” Take a moment to catch your breath here from the stinking cynicism of that complaint. But at least they acknowledge growing squeamishness about leaving the streets of Gaza running in blood to take out imaginary tunnels–though the editors aren’t squeamish in the least.

Hasbara tests the limits of credulity though. The editors claim Hamas leaders are hiding out in those tunnels while Gaza goes up in flames. With Israel going after those tunnels with bombs, tanks, & infantry it’s hard to imagine a place less safe than those tunnels–unless you’re a child in Gaza.

Left-wing Zionist media does a lot of hand-wringing, regretting genocide whilst damning Hamas rockets more. The differences among left-wing Zionists are fracturing & though they all adhere to a Jewish-only state, many in Israel & around the world are protesting the massacre in Gaza. In Israel, in particular, they courageously defy state repression & goon squad violence. Others like the group J Street are involved in pro-Israel rallies & need to be exorcised as indistinguishable from Netan-psycho-yahu.

Right-wing Zionist media is completely unhinged. You only wish you could write them off as crackpots & misanthropes. The Jewish Press (JP), which comes out of Brooklyn, NY, claims Israel did not bomb the UN refugee center (a vacant schoolhouse) in Beit Hanoun yesterday; it was destroyed by a misfired Hamas rocket & says an errant IDF artillery shell from combat in the area might also have hit. The JP also said Israel gave ample notice to evacuate the school. How the hell would Israel know in advance about a misfired Hamas rocket? This contradicts reports from UN representatives on the scene that there were no warnings despite repeated requests to Israel by UN workers.

The far-right Zionist blogosphere is afire today with the headline from the Jewish Telegraph (out of England): “Their God changes the path of our rockets in mid-air, said a terrorist.” If there weren’t a genocide involved, this would be farcical. An unidentified Hamas guy says God made that Hamas rocket misfire, reverse direction, & take out the school in Beit Hanoun? The Zionist writer who started this nonsense quoted David Ben Gurion (Israel’s first prime minister) from a 1956 interview when he said, “In Israel, in order to be a realist, you must believe in miracles.” Are miracles the same as farce? Are evil fairies from outer space possibly involved?

Photos of the Beit Hanoun school bombing are far too gruesome to post, showing dozens of children & others being treated for massive shrapnel injuries & in shell shock. This photo is of Israeli airstrike damage in Gaza City–ostensibly to take out those tunnels underneath the ground where children play.