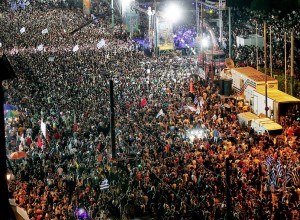 Media is reporting that Greek prime minister Alexis Tsipras & the new finance minister Euclid Tsakalotos are attending a meeting in Brussels today with eurozone heads of state & finance ministers for “another chance to convince skeptical European creditors that it can be trusted to enact wide-ranging economic reforms which would safeguard its future in the common euro currency.” There are lots of questions raised here but the only one that matters is “why in the hell did SYRIZA go through the charade of a popular referendum on austerity & then ignore the decisive vote against it”?

There are the economics of the crisis in Greece & then there are the politics. When we say economics, we don’t mean statistics on trade balances, privatization, taxation, loan repayment schedules, bank bailouts, or all the other mechanics of how capitalism works. We mean that neoliberal capitalism is in a global economic crisis which it is trying to solve on the backs of working people. And not for the first time in Greece. The austerity program the Troika is attempting to ram down the throats of Greek working people is the kind of austerity program they’ve been implementing for decades in African countries causing the tsunami of immigration to Europe & elsewhere.

Neoliberal colonialism now enters the eurozone through the portal of Greece. The last time colonial politics entered Europe was under German fascism which led to the holocausts of millions of people, including Jews, disabled, LGBT people, Roma, socialists, communists, liberals. That’s how desperate capitalism is; that’s how deep its crisis. We always need remember that capitalism in crisis becomes more dangerous, more ruthless, more violent—more demanding in its austerity. But we also need remember that capitalism in crisis is violent precisely because it is floundering. An international banking system which tries to solve its financial problems on the backs of pensioners & schoolchildren isn’t sitting pretty; it’s in big trouble.

Then there is the political crisis in Greece which is a crisis of leadership for working people. SYRIZA appears to have reached the limits of its program—a program that allows staying in the eurozone & doesn’t raise the question of whether to stay under capitalism or not. Greek working people invested trust in SYRIZA, a trust being betrayed in Brussels. It isn’t the trust of European creditors SYRIZA should be worried about but the trust of Greek workers. And they’re blowing that big time. The loss of trust & respect for SYRIZA presents the biggest problem of all. Because, where & who is the alternative?

Burning people with false promises leads to demoralization. A demoralized working class that doesn’t trust, that doesn’t have a program against austerity is a weak & vulnerable working class. Accepting the Troika’s demands of more privatization, higher taxes, smaller pensions, would exact untold human suffering on Greeks. There’s no question that would be a massive defeat. But it isn’t sufficient to write jeremiads. The question for Greek working people is what to do next. And we need all be thinking about that because what’s happening in Greece is headed for Portugal, Spain, Italy, & it’s headed north to Ireland. No working class in Europe will be left unaffected—especially the vulnerable like elderly, children, immigrants, Roma.

International capitalism is spiraling into crisis & squeezing working people to death to solve it. Like the Greeks last Sunday, we need to put our foot down. We need to think carefully about a program for protecting people from neoliberal assault & we need to choose our political leadership accordingly. Until then, it ain’t over till it’s over.

Photo is Greek supporters of “No” campaign in Athens on July 3rd, two days before referendum where 61% of Greeks voted no to austerity. Prime minister Tsipras addressed the crowd. One week later, he ignored their mandate.