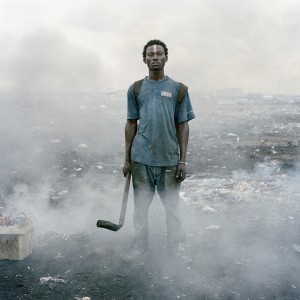 Don’t you wish this was some surreal still from a sci-fi movie instead of reality? The photo, taken in 2010 by South African Pieter Hugo, was just shortlisted for the 2015 Prix Pictet photojournalism award. The young man standing in the photo is Aissah Salifu who worked at the Agbogbloshie market in Accra, Ghana.

Agbogbloshie became notorious as an illegal electronic waste dump for the US & Europe. Illegal because according to the Basel Convention, an international treaty that went into affect in 1992, hazardous waste cannot be transferred between “developed” & “undeveloped” countries. The obvious racism & recklessness was deplorable. In the past few years, there’s been an attempt to legitimize transfers as recycling projects & to deny countries are even dumping. That campaign is led by Bloomberg writer Adam Minter who wrote the book “Junkyard Planet.” Many have begun to claim e-dumping is all a myth. Well perhaps they could explain to us where in the hell the dead electronics are going?

Minter functions as a sort of junkyard dog for the entire industry of electronic recycling facilities, electronics manufacturers, brokers & agents who arrange to move the illegal shipping containers overseas. There’s a mafia character to the industry. He claims most electronics are bought by China so they can recycle metals in the components. That doesn’t accord with a recent UN report that the US & China contribute most of the world’s tonnage of electronic waste & that less than a sixth ends up recycled. According to that UN study, 42 million tonnes of e-waste were dumped & only about 6.5 tonnes were taken for recycling in 2014.

The United States led e-waste dumping with over 7 million tonnes in 2014, ahead of China with six million, followed by Japan, Germany & India. Canada came in 15th place with a dump of 725,000 tonnes most of which they dumped in the Philippines despite protests & the Basel Convention.

According to Minter & others, the e-waste at Agbogbloshie is from Accra & other cities in Ghana, not the US or Europe. There’s no reason to dispute where it comes from. Either it’s being delivered in shipping containers from the US & Europe to Ghana’s ports or it isn’t. That’s completely verifiable. But it’s coming from somewhere & whether it’s dumped from overseas or not, it remains an environmental & human rights catastrophe.

Workers, including children, earn meager sums breaking apart computers, refrigerators, hair dryers, cell phones all filled with toxic metals that affect their health in catastrophic ways. One dull-witted writer talking about Agbogbloshie said the workers there don’t live long & they don’t have much but they’re always smiling. Such stupidity & white supremacist insularity makes you want to weep. But it’s far better to seek active ways to stop e-dumping & to affect the electronics industry to change how they produce things so they are not an environmental & health disaster.