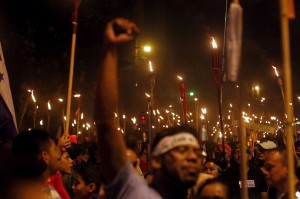 Many young activists may not remember that the relationship between Central American countries (Nicaragua, Honduras, Guatemala, El Salvador) & the US was the focus of antiwar & solidarity work throughout the 1980s. Since the defeat of the Nicaraguan revolution, mostly what we read now is about the tsunami of immigration from Central America to the US or alarmist reports about the the growth of criminal gangs in those countries & the epidemic of femicide in Honduras. Media presentation is that they are thuggish, brutish societies.

In fact, Central American countries have always & continue to play a key role in US politics in the Western Hemisphere. They are not however just backdrops in US politics or “banana republics,” (a demeaning term social activists should not use). They’re complex societies & should be given due respect–especially considering all the violence they’ve sustained from the US military.

Honduras is making news now because of revelations that Hillary Clinton, representing the Obama administration, was directly involved in the 2009 coup against “democratically elected president Manuel Zelaya.” It’s probably stretching the truth in Honduras to claim the elections were democratic & Zelaya is certainly no prize package politically. He’s an oligarch presenting himself as a democrat (not unlike Clinton in the presidential campaign) & was unlikely to bring enduring democratic change to Honduras. The US, nevertheless, has no right to interfere in Honduran politics.

But much more significant, Honduras is making news now because for the past several weeks tens of thousands of protesters have held nightly vigils demanding the ouster of corrupt president Juan Orlando Hernandez involved in the looting of at least US $350 million from the social security system which provides medical care & pensions to approximately 600,000 public & private workers & their families. It’s not mentioned in most media reports that a focus of the protests is a demand to end US intervention in Honduras.

Militarization increased in Honduras after the 2009 coup with the deployment of US troops & the commitment of president Orlando Hernandez to put “a soldier on every corner.” Orlando Hernandez is Obama’s kind of guy. Since the coup, there’s been an avalanche of abuses by soldiers, arbitrary detentions, murder, torture, rape. They never mention all this in those femicide or gang reports.

Under the cover of the drug war & with the full cooperation of the Honduran regime, the US has been expanding its military operations in Honduras with Pentagon expenditures going up every year. The Associated Press called the expansion “the most expensive initiative in Latin America since the Cold War.” According to the LA Times, Defense Department contracts tripled to over $67 million between 2002 & 2012. In 2011, the US authorized $1.3 billion just for military electronics in Honduras. Honduras has the only large US air base between the US & Latin America which is vital to US military domination of the region. They spent $25 million in 2012 to make the base permanent & $89 million more to house the 600 US troops stationed there. (If one counts mercenaries the count is likely much higher.) The entire Pentagon operation has entailed $20 billion since 2002 for troops, ships, clandestine bases, electronic equipment, direct aid to Honduran military & police. One should ask if Honduras still has national sovereignty?

In such a political environment, it is extremely courageous for protesters to hit the streets & demand a halt to all this. We stand with them & should be on the alert to mobilize in their defense lest US aggression against them become more overt & violent.

Our fullest solidarity with the democracy movement in Honduras.