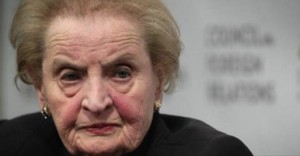 One of the most repugnant & shameful things in US politics is that former Secretary of State Madeline Albright can show her face in public (& even collect honoraria) after saying the death of 500,000 Iraqi children was “worth it” to achieve US policy goals. So it says everything you need to know about Hillary Clinton that Albright is out campaigning for her. Birds of a feather & all that.

In urging women to vote for Clinton, Albright said “There’s a special place in hell for women who don’t help each other.” The dishonesty of that appeal is only matched by the repugnancy of the sarcasm. What about the Iraqi women, the mothers, sisters, grandmothers, & aunties of those 500,000 precious children?

There is a special place in hell all right, but not for those who will not cast a vote for a female thief & war monger. There’s a special circle in the inferno for politicians who consider children as dispensable & as cannon fodder for US hegemony in the Middle East. It’s the same circle where the other human monsters are frying, hopefully for all eternity–Adolph Hitler & Joseph Stalin, Generalissimo Pinochet, Margaret Thatcher, Omar Suleiman (the Egyptian torture master), Israel’s Ariel Sharon. It’s the stinky place in hell. That’s where Madeline is headed. And to our mind, not fast enough.

Gloria Steinem has no war crimes to her name–unless you include promoting the war in Afghanistan to liberate women. Her primary fault is conservatism in the women’s movement when she helped railroad an independent movement into the Democratic Party & electoralism & parked it, leaving the work of social transformation up to politicians–politicians like Clinton & Albright.

Steinem has never been known for her theoretical achievements since her writings are mostly self-absorbed confessional–& are, quite frankly, trite. Despite her reputation, she’s not that cogent a social thinker–which is likely due to her profound elitism. But when she comes out publicly promoting Clinton by saying younger women support Sanders to be “where the boys are,” she disgraces her authority as a feminist even more than she demeans the intelligence & political integrity of young women. That is not an endorsement of Sanders but an indictment of Steinem’s political banality.

Of course, in the interests of full disclosure, I admit that in the early days of feminism I was interviewed twice on NYC radio with Steinem. At no time during those interviews where we sat directly next to each other, did she look at me, speak to me, acknowledge my presence. You never forget that kind of elitism & you never trust a person who can conduct themselves in that way. That’s not tales out of school; it’s insight into her political character.

(Photo is reportedly Madeline Albright but it could be Henry Kissinger. The devil can’t tell them apart any more than we can.)