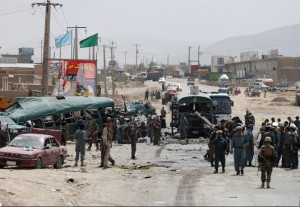 The character of photojournalism seems to be changing to come more in line with that embedding thing the US Pentagon employs to censor news. It’s most evident in those areas where there is war & occupation.

Photojournalism editors have long had an almost anthropological fetish with Hindu religious practices. They’ve always focused on gripping moments on a sports field. But you could find some coverage of Iraq & Afghanistan & even Palestine–though there was a long news blackout on Kashmir. There are certainly photojournalists working the field in those countries but what gets published makes a travesty of war journalism.

It doesn’t take a suspicious mind to wonder why coverage of Afghanistan is either human interest fluff, images of women in that distinctive blue burqa (to remind us that they’re bombing emancipation into Afghan women), or scenes of suicide bombings. How many suicide bombings have there been in Afghanistan? Too many, for sure, because civilians are usually killed. But the number of 25 incidents since 2011 pales by comparison to the number of bombing sorties flown by US warplanes. Just in the first forty days of 2016, the US had flown 422 bombing missions; in all of 2015, they totaled 4,600 sorties.

Thousands of bombers do a lot damage, kill a lot people, destroy homes, mosques, fields, schools, & terrorize the population. And US news media doesn’t report about that? What we get instead is sanitized news that leaves out what matters about war & occupation in order to keep us politically stupid & passive in opposing their monstrous wars.

The historic imperative remains: rebuild the international antiwar movement to demand US our of Afghanistan! US out of Iraq! US out of Syria!

Photo is Afghan troops inspecting damage from a suicide attack in Kabul yesterday.