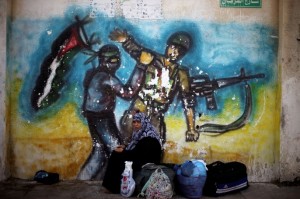 This is a mural at the Rafah border crossing from Gaza into Egypt. The Palestinian woman sitting in front of it is waiting for a travel permit to cross after Egypt opened it yesterday for five days.

Mural art has played an immense role in protest, from opposing the British occupation of Northern Ireland to the Arab uprisings of 2011, most notably in Egypt & Yemen–& of course all over the Israeli apartheid wall.

Culture, especially music & art, have always been part of social protest–which is exactly why the cultural boycott of Israel is so important & why Israel fights it tooth & nail, including throwing exorbitant fees at celebrities to induce them to perform as the backdrop to ethnic cleansing.

The tragedy is that artistic creativity would best be used to explore the human psyche & our relationship to each other & to nature but in war & occupation it must be used to assert our humanity against barbarism.

Build BDS, the economic, cultural, & academic boycott of Israel. Buy nothing with a barcode beginning 729.