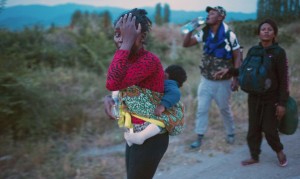 There are so many wrenching photos of immigrants around the world, of human beings at their most vulnerable & most determined. This young woman & child are walking with a group on a road in Macedonia on their way to the Serbian border, which has become one of the main transit routes to Europe for thousands of refugees from Africa & the Middle East. By the time they’ve arrived on this road in Macedonia from Greece, they’ve already crossed continents & the Mediterranean Sea.

In its endless parsing of definitions, the UN distinguishes between immigrants & refugees. Those distinctions, though never valid, are rendered insane at this moment in history.

Humane societies would be scouting with vans & buses to pick up these exhausted people & transport them to shelter. But of course, humane societies would not engage in the war, occupation, drone bombing, & plunder which forced them to move in the first place.
Godspeed to these refugees. Immigration is a human right! Open the borders.