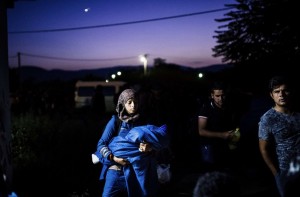 This refugee woman & her infant are leaving a train in a border town between Macedonia & Serbia. Likes thousands of others, she’s trying to get north to other countries in Europe.

While the US & European Union militarize their borders & whip up right-wing nationalists against refugees, photojournalism documents that tens of thousands of them are women with infants & small children. Just as often, it is unaccompanied children. That’s as true on the US border as it is in the Mediterranean Sea & the borders of Europe.

It takes a special kind of barbarism to build barrier walls & take your navies after women & children. It’s neoliberal barbarism, a scorched earth economics that sees human life as dispensable in service to private wealth & oligarchy.

Immigration is a human right for all men, women, & children. Open the damn borders! If that means the end of neoliberalism, all the better for building a humane world.