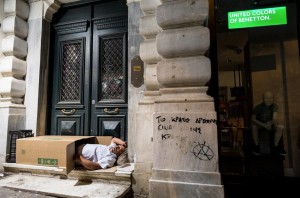 Homeless in Athens: this elderly man sleeping rough is the European Union-IMF bail out plan for Greece. Pensions are directly targeted along with other social services.

Greeks are voting in a public referendum today whether to accept or reject EU-IMF extortion. There have been massive protests demanding a “no” vote. Which ever option they choose, life will be hell for awhile. But a “no” vote giving the bum’s rush to plunder will be the most emancipating choice in the long run. They can rebuild an economy without doing it on the backs of working people & strengthen their forces to bounce capitalist predation once & for all.

Revolution don’t come easy but it never comes by groveling before tyranny.

Our fullest solidarity with our Greek brothers & sisters.