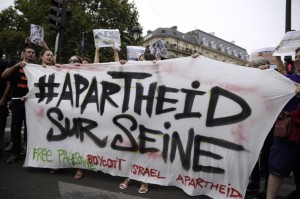 In line with French evictions & deportations of Roma & assaults on immigrants at Calais, authorities in Paris decided to celebrate “Tel Aviv Beach” yesterday in its annual beach-on-the-Seine festival which took place on the Seine river bank next to the Paris City Hall.

Yahoo reports–in a French style likely coming from the Parisian mayor Anne Hidalgo who made the decision–“The middle-east problematic is a very sensitive question in France as the country was shaken last year by several protests against the Israeli occupation & numerous clashes with the Jewish community.” Ah, but the “middle-east problematic” is a much more sensitive question in Gaza. So sensitive that the event can only be considered an obscenity since this time last year, while Israelis were lolling on Tel Aviv beach, Israeli war planes bombed four small boys to death on a Gaza beach just 45 miles away.

Just a few weeks ago, baby Ali Dawabsha & his 32-year-old father Sa’ad were burned to death by Israeli settlers in the West Bank & a right-wing settler attacked a LGBT rights march in Jerusalem, stabbing to death a 16-year-old girl. This is hardly a time to herald Israeli beach culture when its culture of violence is exploding not only against Palestinians but Israeli LGBTs, Ethiopian Israelis, African refugees.

Yahoo also reported that “a polemic has risen” from the mayor’s decision to celebrate Tel Aviv beach culture. You could say that. Only a small number of celebrants came to play beach ball at Tel Aviv sur Seine where they were protected by riot cops &–so reminiscent of the Israeli occupation of the West Bank–had police checkpoints. BDS Paris outnumbered them by a long-shot, showing up with banners, unfurling Palestinian flags from the sidewalk overlooking Tel Aviv beach, & holding a “Gaza beach” protest.

Hats off to BDS Paris! Build the economic, cultural, & academic boycott of Israel. Demand no military aid to Israel.