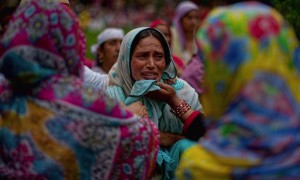 In an uncustomary breaking of the news blackout on the Indian occupation of Kashmir, media posted this photo of a family member at the funeral of 23-year-old Bilal Ahmad Bhat, a young man shot dead Tuesday by a patrol of the Indian paramilitary Border Security Force (BSF).

None of the media has been able to present a coherent narrative of this incident. Reconstructing from several mangled narratives, it appears that on Monday two young men alleged to be members of Lashkar-e-Taiba (designated by India as a Muslim terrorist group) & accused of involvement in a number of “militancy-related activities” engaged in what is called a “gun battle” with Indian security forces. Gun battle is not the right term since whether they were even armed is in question & the operation was to hunt down & kill the two men. To do that India marshaled counter-terrorist paramilitary army units, the Special Operations Group from the police, regular army units, & they deployed choppers hurling grenades from the air. This mighty force cordoned off the area & began their murderous hunt. All that fire power against two men? That sounds very much like overkill. Like a massacre even.

Apparently, due process is no part of military occupation because any reasonable person would think such a sizable, well-armed force would be able to encircle & capture the alleged terrorists & charge them in a court of law rather than summarily execute them. Unless they really weren’t guilty of any crimes at all except resistance to occupation.

Reports from the area said as the military operation went on a large number of villagers came out of their homes in support of the young men & began chanting freedom slogans & hurling rocks to break the cordon & give safe passage to the militants. Those protesters were then dispersed with tear gas shelling & soldiers shooting live ammo into the air. 19 people were injured.

After villagers in the area heard of the murders of Gulzar Ahmad Bhat & Showkat Ahmad Lone by the military, thousands more came out in protest. That’s when the BSF opened fire on unarmed protesters & killed young Bilal Ahmad Bhat. His murder caused even larger demonstrations against the Indian occupation. Thousands attended his funeral.

It’s important to know that India has one of the largest police forces in the world, second only to China, & one of the highest ratios in the world of police to civilians (130 police per 100,000 residents). Because India has several military, paramilitary, & special police forces, it’s hard to know if the figure of nearly 1.6 million police includes all of these or just regular police officers. An estimated 700,000 Indian security forces are deployed in Kashmir–some of them counter-terrorist units only deployed in Kashmir. The ratio of security forces to residents in Kashmir is sky-high, dwarfing that 130 to 100,000 figure for all of India–& signifying an occupation.

The Border Security Force (BSF) that shot young Bilal Ahmad Bhat is a paramilitary force formed to protect the borders of India but marshaled repeatedly as a terrorist force against the people of Kashmir. It seems they weren’t even part of the operation against the militants but just passing by when they opened fire. One of the ugliest things about the paramilitary & police units in Kashmir is that they have special incentives & earn bonuses for every militant killed or arrested. Now we can understand Indian’s special military relationship with Israel; it’s a political affinity based in colonialism & terrorism.

Our deepest condolences to the families of the three young men; may they RIP. Our fullest solidarity with the people of Kashmir. May their Intifada go international.