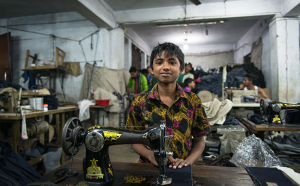 Sweatshop economics are central to neoliberalism, the barbaric phase of capitalism. Multinational corporations save not billions, but trillions getting workers to produce goods for chump change & selling them for big bucks. A blouse made by a sweatshop worker overseas for one US buck can sell for $350 in an upscale US shop–making a chump out of the consumer as well.

Of course, while the garment industry is dominated by sweatshops, that isn’t the only product they produce. Everything from toys to underwear to shoes to high-tech electronics & machine parts come out of them. At Christmas time, “Santa’s little helper” is a child worker in a sweatshop.

A sweatshop by its very definition is a workshop with low unfair wages, long unreasonable hours, dangerous working conditions, & absolutely no labor rights. Female & child labor are central to the system. That’s precisely what makes them so appealing to modern capitalists & why they’re spreading like a virus all over the planet.

After the Rana Plaza collapse in Dhaka, Bangladesh in 2013 & growing political organization among garment workers, the sweatshop economy had a problem on its hands. A public relations problem. The sweatshop economy includes retailers, sweatshop owners, US, European, Japanese, & other governments that broker free trade agreements with governments like Vietnam, Cambodia, Bangladesh, the Philippines, Nicaragua, Guatemala, Honduras, Mexico, China, Haiti, & umpteen other nations.

Media is now on a criminal campaign to salvage the image of sweatshops by reconstructing reality with big fat lies. We’re used to that from hacks like Nicholas Kristof & Paul Krugman from the NY Times who cover their treachery with sentimental crap about women’s rights. Using women’s rights to promote war, sweatshop economics, prostitution, child labor is the way of the world under neoliberal capitalism.

This week many media sources are touting the photojournalist album of Claudio Montesano Casillas covering what they call the “informal garment sector.” Casillas postures himself as a naif who happened across unregulated & unregistered garment factories in Bangladesh & documented them to evoke outrage.

He says there are an estimated 7,000 informal factories in Bangladesh–although how the hell he knows that is not explained. If he got the figure from the Bangladeshi government, that means they know these hellholes exist. Casillas says–& media repeats with a straight face–that working conditions in the informal export-oriented factories are much worse than formal export-oriented factories. They’re more dangerous, lower paid, require longer hours, & have more kids working in them. But the conditions he chronicles are identical to those in allegedly regulated factories.

To make the case, they quote the Bangladeshi inspector general of factories who claims 80 percent of Bangladesh’s garment factories which supply global retailers have been inspected & found to be safe “though he acknowledged that many needed work on fire safety & electrical systems.” Sometimes you want to cry when you realize how stupid they think we are.

Bangladesh is making a killing on sweatshop economics & child labor. The number of billionaires has tripled in the past few years. Conditions of labor, including for children, in brick factories, shipyards, tanneries, & other industries is an international horror showcasing the consequences of sweatshop economics. You don’t drag Bangladeshi government officials out to make sweatshops look good anymore than you drag out a Pentagon general to talk peace.

Sweatshops are a scourge for women & children. The organization of working people into labor organizations to advance their interests is a primary task around this world–& one which young people should consider committing their lives to.

This little guy is a garment worker in a blue jeans factory–one of the ‘unregulated looks just like the regulated’ kind.