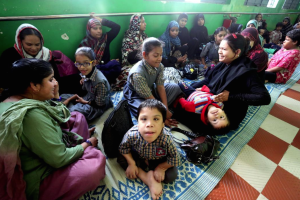 It’s been 31 years since the Union Carbide pesticide plant in Bhopal, India leaked toxic gas into the city, killing an estimated 25,000, injuring half a million, & contaminating the environment & water supply. The leak, which went on from December 2nd to 3rd, 1984, was caused by neglect of safety systems to save money & is still considered one of the world’s worst industrial accidents.

US-based Dow Chemical is now the owner of Union Carbide. Those who are veterans of the anti-Vietnam War movement remember Dow as the producer of napalm & Agent Orange–both used in the war. Napalm is an incendiary weapon used to burn people to death after excruciating pain. Agent Orange is a defoliate containing dioxin that caused at least 24 different health symptoms & death among veterans & their offspring–& continuing catastrophic health problems for the people of Vietnam. At the time it was used by the Pentagon in Vietnam, it was banned in several countries; Dow knew full well of the toxic properties of dioxin. That’s the kind of pathology the people of Bhopal are up against.

In June 2010, an Indian court indicted seven former managers at Union Carbide for negligence, sentenced them to two years in jail & a fine of $2,100. Despite the political work of Bhopal & environmental activists & public outrage in India, the Supreme Court there upheld corporate impunity & turned down an appeal for harsher sentences. Two years later, a US court absolved Dow of all liability in the Bhopal disaster which means they are not liable for remediation or pollution-related claims.

Local water sources remain contaminated with several toxic & corrosive chemicals, including lead, mercury, benzenes, & DDT. In 2012, the Indian Supreme Court ordered the Bhopal municipality to provide clean water to families for cooking, laundry, bathing. The source of water provided is not identified but the color is red, making it of questionable quality–especially for a population already adversely affected by the Union Carbide gas leak.

This photo is mothers with their children born with congenital disabilities waiting for treatment at a clinic for gas victims. The unaddressed environmental catastrophe means a second & soon a third generation of children suffering chemically-induced illness & neurological disabilities. The full weight for their care falls on families. They’re little human beings, cherished as all other children, & as we learn from disability rights, perfect just the way they are, but caring for a child with disability is an immense challenge families should not have to sustain without help.

Bhopal is an ongoing crime. Though justice has been flouted with contempt, the demand has not yet been silenced. There’s enough criminality involved here to sink a continent. Our fullest solidarity with the people of Bhopal in their struggle to bring Dow to justice.