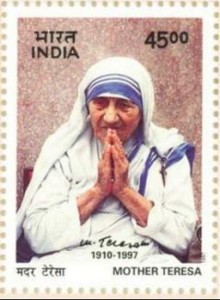 Disappointing to see my favorite actress Juliet Stevenson playing Mother Teresa in a biopic film likely to be hagiography. It may seem blasphemous to not hold Mother Teresa in high esteem but nobody holy who stands next to dictators with their hands in a prayerful pose is believable. Nor certainly holy.

There’s plenty of scholarship now about Mother Teresa, including the derivative (if not outright plagiarized) book by Christopher Hitchens called “The Missionary Position.” She’s an icon, not of service to the poor nor certainly of opposing inequality, but of ennobling suffering–as if poverty was a punishment for some presumed mortal offenses under the rubrics of Catholicism. She was also a fraud who served the poor in deplorable conditions & never made an accounting of millions of dollars donated for her work.

Her image as a saint is the triumph of public relations over reality. Because if there’s one thing our little saint was good at, it was covering for neoliberal predation by making the suffering it created look like it was good for the poor & a gateway to heaven.

(Photo is Indian stamp with image of Mother Teresa.)